In the bee’s midwinter

In the bee’s midwinter frosty winds made moan,

Earth stood hard as iron, water like a stone.

In the bee’s midwinter not so long ago.

Ok, so I changed a couple of words. 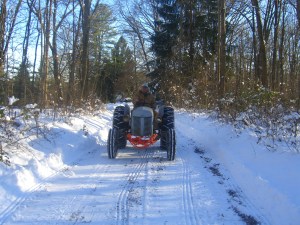 After a morning fussing with the tractor, he identified the problem as the ignition switch. But he got the job done!

Winter has hit hard with the New Year.  Six  inches of fresh snow blanket Maywood.  My car remains halfway down the driveway where I abandoned it last night for fear of sliding right into the house.  (I had already inched my way down the Wicked Curve on Miller Lane as another car tried to make its way up the Wicked Curve, neither of us able to back up.) As I click at the keyboard this morning in blinding snowlight, Maywood Man is outside trying to get the tractor to start so that he can begin plowing.

It is 11 degrees with 25 mph winds. The snow dazzles under cloudless blue skies.  Gusts of wind blow through snow-laden branches and send the powdery flakes whirling like smoke. It is stunningly beautiful from my indoor perspective near a cozy wood stove.   Homemade butternut squash awaits my frozen plowman when he comes in from clearing the road.

Judging from the dip in the snow on top, the hive is warm enough to melt it. Icicles are on the outside of the hive.

I’m guessing the perspective inside the bee hives is less spectacular.  It is the bleak midwinter  for them.  Too cold to leave the hive, they huddle in a  ball to maintain the hive temperature.  They eat the honey they stored last summer.  They also have grease patties that Mr. Beekeeper/Plowman made for them, a combination of sugar and Crisco.  If they have sufficient numbers, they can keep the hive warm enough to move around to the honey.  If not, they eat what is nearby and hopefully don’t starve before the weather warms up.

At Winter Solstice, bees were busy, but still had plenty of grease patties.

Two weeks ago, on a balmy almost 70 degree day, we took a peek in the hives to assess their strength and to offer more grease patties.  The hives were all active with plenty of bees coming and going.  Although the bees have no plants to pollinate in winter, they use the warm winter days for cleansing flights.  Yes, the ladies must keep the hive clean!   Some bees were nibbling at the grease patties,  but they had still had plenty from the last gift– good sign, I think, that they had plenty else to eat.

A week later, Mr. Beekeeper took another quick peek.  Hive B was low in numbers.  So now he has reason to worry.  Should he have removed the grease patties and replaced them with easier to digest fondant?  Is there enough air circulation to keep moisture from building up and freezing into tiny stalactites in the hives?  Should he sweep the snow from around the hives?  Or leave it to act as a blanket?  If he could put tiny little blankets on each of his bees, I think he would do it.

A couple of dead bees at the entrance to Hive C.

Last winter we lost all four hives before Christmas.  It hadn’t even gotten really cold yet, but their numbers were too low to keep themselves warm.  This year, the hives are wrapped for solar heat in tar paper and they have plenty to eat.  They just need to stay warm.  Weather like today’s does not make it easy.  As my son-in-law commented, we went to bed in Maryland but woke up in Siberia.

Ah, but that’s the thing about Maryland.  The weather is always changing.  If the bees can get through this week’s projected snow, rain, ice, and minus two degrees, by next Friday it is supposed to reach 40.

Hang in there, little bees!  We’ve passed the Winter Solstice.  The days are getting longer. 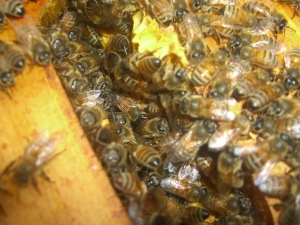 6 thoughts on “In the bee’s midwinter”