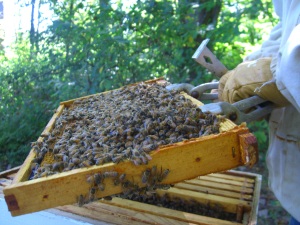 The honey bees are busy with the last burst of blooming weeds that cause humans so much distress, so bee season has not quite ended here.  However, we have not inspected the bees in awhile.  A gorgeous summery weekend in early fall was a great opportunity.  (Especially since the next two weekends will find us on the road.) 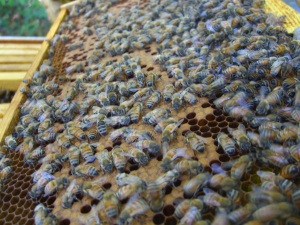 Lots of brood in Hive A.

The good news from the bee yard is that Hive A is strong and healthy.  No honey from them, but we did not really expect any this first year.  Hive D, the provider of our July harvest, has several frames of capped honey in the second honey  box.  Mr. Beekeeper decided to leave the honey box on a bit longer because the goldenrod is still blooming and (the real reason), because he did not bring the fume board with him to enable us to take the honey.  So there’s some fun to look forward to…a little fall harvest.  To those of you who are weeping desperate little tears hoping for honey, I’ll let you know what we have when we get it all into jars. 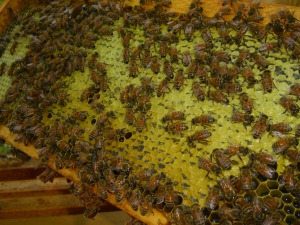 A peek at the fall harvest.

And now for the beekeeper worries… 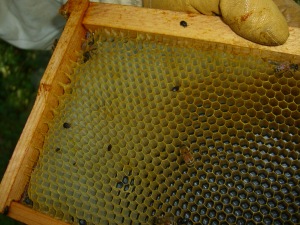 Small hive beetles can ruin a hive and its harvest by breeding in the bee’s brood cells.

Small hive beetles were seen in Hive B.  This is not ok.  There are a variety of ways to eliminate them, each with their own advantages and disadvantages.  On the chemical side, Checkmite+ is  a varroa mite control that will also deal with beetles.  It is authorized for use in Maryland.  However, Mr. Beekeeper already bought Apistan for fall application against varroa this season, so we won’t be buying Checkmite+.  It also is a heavy duty chemical attack and the beetles do not seem to be that prolific.

There are non-chemical options for physically trapping the beetles.   Traps vary in design and placement in the hive.  What they have in common is a physical trap for the beetles to fall into and something for them to drown in, like mineral oil, vegetable oil, or vinegar.  One calls for a mixture of water, apple cider vinegar, sugar, and ripe banana peel.   That sounds like too much work.   I’m looking at getting a type that hangs between the frames, with a simple oil bath to drown them.  I am fully aware that the bees may seal the thing with propolis, because they like to seal things with propolis.  But these traps are cheap and disposable. 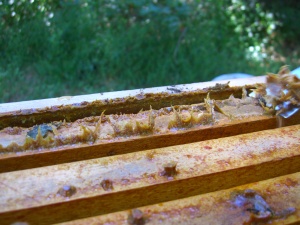 Propolis is the sticky stuff bees make to seal the hive. It’s a real pain to get off countertops. 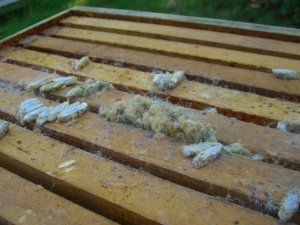 The hive is dead and full of wax moths. They can do serious damage to the hive structure.

Hive C is, alas and indeed, dead.  And completely ruined by wax  moths.  Mr. Beekeeper stopped up the entrance to prevent stray bees from going in and, more importantly, moths from coming out.  There were many cocoons in the hive. He will be removing the hive and putting the frames (wrapped in plastic bags) in the freezer to kill off the moths before cleaning the frames and storing them in plastic for the winter.

What killed off Hive C?  Was it the wax moths? Or was it a weak queen?  This is a hive that survived last winter but has been (along with Hive B which has the beetles) slow to build all season.  Did the queen die and the hive fail to produce its own queen?  Did the moths get established in a weak hive or did they seize the opportunity to take over a dead one? 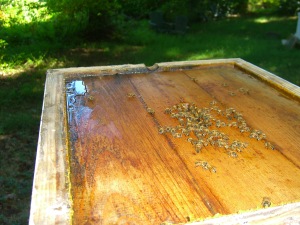 A puddle in the hive, most likely from condensation.

Hive D continues to thrive but opening the lid revealed a puddle of water, presumably from condensation from inside the hive.  Some online  searching offered many solutions for winterizing the hives to avoid condensation, but it is not winter yet.  I do not have any ideas at the moment, but do know that condensation in the winter freezes, and cold, wet bees die. (Beekeepers, your suggestions are most welcome!)  Aside from water on the lid, the bees were busy in the honey box and several frames have capped honey for us!

So many questions.  Here’s one I know some of you are thinking: What else does she have in her freezer?  And oh, the tales we could tell.  But that’s another post! 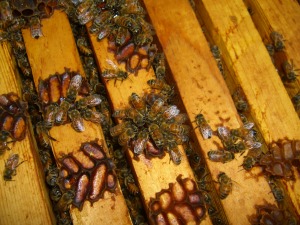 Group work. What are they doing? Probably guessing what I’ve got in my freezer.