The First of This Year’s Honey: Beating the Bear

We pulled four frames of honey today. They were capped and we are so afraid that the local bear will defeat our electric fence and get to the hives again that we decided to pull some honey as soon as possible.

Those of you familiar with our bear escapades will remember that last year the bear came by three times, knocking the hives over without managing to procure any honey. The bees were pretty traumatized, though, and took out their anxiety on Mr. Beeman, buzzing at him with a ferocity he had never seen.

Beeman, understandably, does not want to lose any honey to this bear.

Early this week, we noticed that one hive had some frames that were capped. Yesterday, Beeman put a bee escape on that hive to prepare for taking the frames. A bee escape is a maze-like board that goes between the top box and the next box down in the hive. At night, the bees go “downstairs” where the queen is. With the bee escape, the bees can go down, but they can’t figure out how to get back up. That leaves the top box relatively bee-free, which makes it a whole lot easier to take the box. Ha! We are smarter than the average bear.

Well, mostly smarter than the average bear. Beeman forgot to plug the electric fence back in after adding the bee escape. He remembered at 3 a.m. Talk about an electric jolt! He jumped out of bed to plug in the cord and then made his way by cellphone light to the bee yard to make sure the hives were still intact. If any bear were in the vicinity, the sight of Beeman in the woods in his underwear at 3 a.m. would have scared him away, for sure!

We spun the frames in our new-last-year electric spinner. It is much more efficient than hand-cranking, although it doesn’t provide quite the same upper arm workout.

Today’s honey is much lighter than last year’s. Last year’s honey had the strong molasses-like taste of tulip poplar. This year, the honey is lighter and more delicate with definite wild berry overtones. No surprise, since we have been picking blueberries by the bucket and tons of wild raspberries are just now ripening. (I just have to figure out how to beat the deer to those berries!)

The air has also been aromatic with wild rose, honeysuckle, and, recently, the oak leaf hydrangea, which is evidently a pollen feast for every pollinator in the area. They have been all over it! 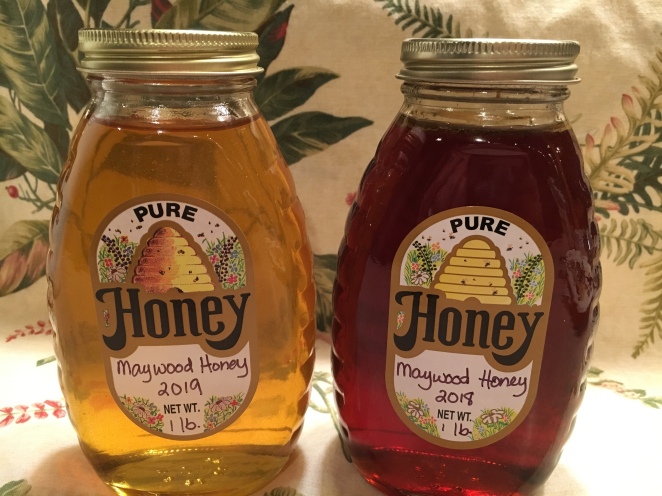