Crunch time: shopping with the kid

Tip of the day:  take a nap before going Christmas shopping with a five-year old.

That is how I survived yesterday.  After enduring the school-wide Christmas party at school (and I confess to ducking out of the “talent” show to get some planning done), I made one wish-it had-been quicker shopping stop before coming home.  I staggered upstairs for a quick nap before picking up Harper from the bus.

He switches over to “Santa Claus is Coming to Town,” struggling with the order of the rhymes.

You better not cry,

You better not shout,

You better not pout….

I offer to help… (It’s pout, cry, shout, telling you why… and I’m about ready to cry)

This is all within the three minutes it takes to drive down the road to the house.

Back home we unload the backpack and have a little snack before heading out again.  I desperately need a cup of tea.  Harper gets a mug of hot cocoa with some marshmallows and a candy cane to stir in it.  Yes, I acknowledge that sugar was probably the last thing the kid needed at that moment, but it’s Christmas, ok?  How he even consumed it is beyond my understanding–the jabbering is incessant.

Off to shopping, we’re not even out the door when he burps.

“Some came up into my mouth.”

I’m rethinking the wisdom to going anywhere public.  I’m envisioning an awful scene in Greeting and Readings.  But the kid doesn’t shut up.  He doesn’t sound sick.

“Erin threw up in school today.  At lunch.”

“Was she sitting near you?”

“But she threw up on the floor right next to me.”

I’m now breaking out in a cold sweat. Oh, please God, spare us from the awful-awful at Christmas.  All the way to the mall he talks about throw-up.  Why do we throw up?  How does it happen?  He is fascinated with the topic.  It’s making me queasy.

We reach our destination but it’s raining.  Harper has no hat.  I have a hood and an umbrella.  But I can’t hold the umbrella, my cane, and Harper’s hand at the same time.  Harper gets the umbrella.  I should mention that it’s windy.  Either the umbrella is going to turn inside out or Harper is going to blow away like Mary Poppins.  He likes the latter idea and tries to catch the wind.  While bouncing.  Through a parking lot of last-minute Christmas drivers.  My only hold on him is a finger through the loop on the collar of his coat.  He’s going very fast.  Did I mention the cane?

Safe inside, the goal is to shop for Mommy, but everything on his eye level is geared for him.  And there is an amazing array of candy at Greetings and Readings.  Clearly, his tummy is fine because he wants all of it.  We manage to select gifts for baby Emily, Pop Pop and Mommy.  These, dear family, are clearly what Harper wanted for you, in spite of any attempts on my part to steer him toward other items.

At the risk of ruining baby Emily’s Christmas surprise, Harper found a baby rattle shaped like a magic wand.  He doesn’t even realize how appropriate that is for the new little Princess who uses her parents as a throne.  The rattle makes a magic wand sound when you wave it.  It’s quite magical sounding.  Brrrrrrrring!  And very easy for a baby to activate.

Because it goes off at the least little movement and there is no “off” switch. 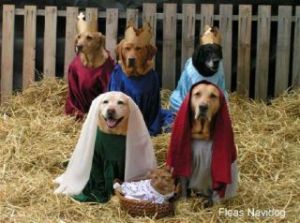 Fleas Navidog. (Thanks to Linda B.)

Just my luck…they’re playing “Feliz Navidad.”  Harper doesn’t know this one, but he catches on real quick.  Perseveration comes to mind again.  That song is like “The Song That Has No End.”

Mission accomplished.  I say, brrrrrrrrrrrrrring on the wine.