What do you do when you and your favorite five year old find yourselves stuck at home on a gorgeous sunny morning?  Check out the tadpoles, of course.  We had gone down to the field to see how the blueberry plants were doing and, while I was yapping on the cellphone, I tried to distract him by making him count blueberry blossoms.  At five, he’s too smart to be fooled by that ploy.  He was more interested in visiting the tadpole pond that he had discovered with Uncle Chris.

Ok, I agreed.  What was weird about our little excursion was that he took me.  I’ve lived here for eighteen years but he knows where the tadpoles are.   Go down the hill to the field, take the tractor path to the clearing by the stream.  Then go right, following the stream and the trail blazed by the trespassers until you reach a small pond.  Well, it’s small for a pond.  It’s big for a tadpole puddle.  And it is filled with tadpoles.

The spring-fed pool lies above the streambed in a primeval setting.  On this beautiful May morning, sunlight from a clear blue sky filtered through the woodland trees to the fresh green undergrowth.  Clumps of skunk cabbage with their enormous leaves dwarfed little Harper.  I half expected to see a brachiosaurus come lumbering along.  The pond had a little “beach” to it, which Harper promptly slipped on and gooped up the back of his pants.  That didn’t stop him, though, from scooping up fistfuls of tadpoles.

We headed back to the house with some of the slimy critters.  Not forewarned of this adventure, I had not brought a jar along.  Harper wrapped eight tadpoles in a leaf and carefully carried them home.  Once home, I whipped out the fancy-schmancy bug inspection kit that I had found at the Dollar Store.   This amazing scientific tool is a clear plastic container with a special lid–one side of the lid has air holes and the other side contains a magnifying glass.  It even came with plastic tweezers for picking up icky things.  So we filled the container with tap water and plopped in the six remaining tadpoles that survived the leaf ride.  Alas, it was well-water and not pond-water, thus ensuring certain death for our amphibious friends.  We did get some good inspection time before they went into permanent sleep mode.  Their bodies were about the size of a pinky fingernail with a long tail.  Looking carefully through the clear container the very tiniest of leg buds were apparent–if you knew to look.  Harper didn’t “get it” that these little swimmers were preparing to turn into frogs. 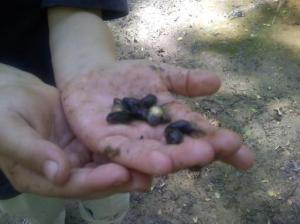 I am now dying to get back to the tadpole pond to check on their progress.  Next time, I’ll go prepared to collect pond water.  And PopPop is talking about setting up an aquarium.