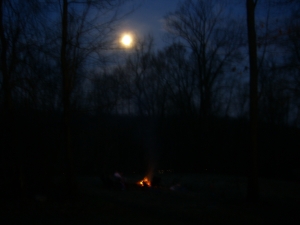 March is a conflicted month.  It wants to become spring but can’t quite pull off the zing of April.  Friday was an incredible 70 degree day.  I came home to the announcement of a bonfire.  Neighbors came over for to roast hot dogs and s’mores while the kids played in the yard.  After kiddie bedtime, daughter, son-in-law and friend ventured up from the city with banjo and guitar.  The full moon tried to shine but a front full of clouds blocked the view.  It was so perfect that it was hard to realize we were three months too early for lightning bugs.  Hey, there aren’t even leaves on the trees yet.

Today was perfect for working in the yard.  Not too hot, not too chilly.  Sunshine perking things up.  And here is where the spouses go divergent ways.

I decided to tackle the spring raking.  The crocus want to be seen.  The daffodils reach their green arms skyward.  The chives have emerged and will soon be appearing in my morning eggs.  Getting some good raking time in March means that April can be dedicated to more creative gardening.  Ah, the promise of spring!  New life is just waiting to burst into bloom. But man oh man, there are so many leaves and branches and twigs and just stuff everywhere.  It is a daunting task.  Even with the leaves gone, the beds just look forlorn.  I raked out the front beds and then took a lunch break.  Then I raked my potager–the kitchen garden that runs long the back of the house.  (With that raked, I’m that much closer to getting kale and spinach planted.  It could actually happen.)

I raked mounds of leaves to where they won’t blow back into the beds.  As I raked I surveyed all the nooks and crannies of leafy mess, all the thorny things sprouting where they do not belong,  all the trimming and tossing that a garden needs to look pretty.  And it so overwhelmed me that I took a nap in an Adirondack chair.  At least it was a good day for dozing in the yard.

Meanwhile, down in the field, John was fencing in his new vegetable garden.  This week he rented a tiller and turned over a very large square of what we hope to refer to as former zoysia grass.  (He rented a tiller, because Mary Beth has not yet bought a tiller for us to borrow.)   Buoyed by the enthusiasm of the end of winter, he is gung-ho to grow everything imaginable: corn, lima beans, tomatoes,cukes, peas, beans, squash, goards, and pumpkins.  He has plenty of space and lots of sunshine.  There is, however, a disturbing lack of water down there.

I’m feeling an uncomfortable connection to a classic French film Jean de Florette, in which Jean inherits a property and launches forth with a grandiose scheme that lacks only one thing–a reliable water source.  The film has a classic French film ending: despair and disaster.  Stay tuned for more adventures from John’s garden.