These were actually cut in August and abandoned (on purpose) in the music room.

If  I were a proper gardener, I would not be drying hydrangeas in September.  A proper gardener cuts blooms at their very peak, preferably in the morning of a beautiful dry sunny day.  For hydrangeas, that would be in late June or early July.  I know of one proper gardener who takes those perfect blooms and plops the stems into a bucket of anti-freeze.  The flowers soak up the anti-freeze and are preserved in their perfect summer state.  Or so I’m told.  I haven’t actually tried it.  A proper gardener also dead-heads spent blooms and trims the bushes back at the right time of year.  That would mean that hydrangeas in September should be cut back and absolutely, positively shorn of all their now-faded summer glory.

But I’m not a proper gardener.  I didn’t dead-head the blooms because they still had color in them.  They weren’t all black and crusty like the cone-flowers or black-eyed susans.  Plus it was hot.  When it’s hot, I’d rather sit on the porch beneath a circling fan and sip iced coffee (preferably laced with kahlua).  So forget about actually cutting back the overgrown bush.  Ack!  That would work up my sticky perspiring glow into an actual froth of sweat. 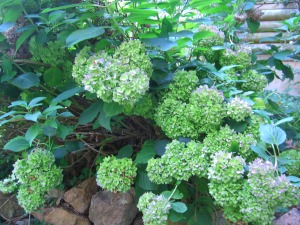 So now it’s September and the cone-flowers and susans are looking ready for spooky Halloween centerpieces.  The hydrangea bushes look like they have been on steroids and plan to take over the planet.  There are actually little baby hydrangea bushes growing and I would love to (get my husband to) dig them up and plant them in other beds, but I have to trim the overgrowth to find them again.  (This I will do myself. If you have seen how he trimmed the lilacs, you would understand.)

Step one is to harvest the leftover blooms.  They are no longer the pure blue that inspires wedding bouquets.  They are turning like leaves into autumnal hues of purple and green.  They won’t go icky brown until after the first frost.  Now is the perfect time to just snip and decorate with them.  I cut the blossoms and arrange them right into the basket.  No water.   Nothin’.  I put the basket in the hallway.  Ta da. Done.  A week later the soft autumnal flowers are dried crispy but retain the same color.

Lest you think I am overly clever, I began drying hydrangeas by accident.  And often, if I am successful, it is because the magic drying fairy has taken pity on me.  The first time I dried hydrangeas, I cut some flowers, put them in water in a vase and put the vase in the music room.  And completely forgot about them.  Um…I do this a lot.  Some flowers don’t mind this.  I have a vase of pretty yellow roses from my orthopedic surgeon that dried quite nicely.  Usually, though, I end up with vases of dried twigs sitting in oogy water with goopy leaves.  The hydrangeas, however, looked great.  I decided after that to leave all the hyrangeas in their vases until dry–and I ended up with a lot of shriveled up hydrangeas.

After much trial and error, I have figured out some general principles to lazy hydrangea drying.

No direct sunlight in the hallway…a good place for drying.

This was a good blooming year. (Or should I go Brit and say “a bloomin’ good year”?)  I have baskets full of dried blooms to show for it.  But only because the flower fairy was nice to me.

These were cut a week ago and are now dry.