Pioneers in the woods…or is it wood?

This week we hosted a Pioneer Day at Maywood for the new international students at school.  The ESL history  teacher had shown the students Colonial House and told them that I lived like that…sort of.  Well, ok, yeah, I live like that except that I have indoor plumbing, electricity, 2 zoned heat and AC, high speed internet, and a few other modern conveniences that were unknown to the pioneers.  I do, however, live in the woods.  And that is a big deal to kids who are from Seoul, Beijing, and Hong Kong.

First off, we showed the students the house.  It’s a log house “just like the pioneers”–except that it is much  bigger and has insulated windows and carpet and kitchen appliances.  Did I mention wireless internet?  These city kids who live in high rise apartments are not impressed with modernity, but the big house surprised them.  And it’s made of real wood.

Next, we walked them down to the stream.  According to the Map My Walk iphone app with GPS that monitors my every step even in the woods at Maywood (just like God does!), it’s almost a half mile down to the stream.  Boys being boys, the  first thing they did was walk across a little stone dam someone had built and get their jeans wet.  Then we had them fill buckets of water–because pioneers did not have indoor plumbing–and carry the buckets back up to our yard where our next task was to prepare lunch.

One of the guys with an axe.

Lunch was hot dogs cooked over a fire.  But they had to build the fire.  And before building the fire they had to cut wood for the fire.  One of the girls described it better than I can:

At least one girl tried splitting wood–she was pretty good at it!

One of the boys put it this way:

The axe was very heavy and the woods were very thick, so chopping the wood was difficult.

I’m thinking a little vocabulary lesson is in order this week.  There’s a teensy difference between clearing a forest and splitting a few pieces of log. 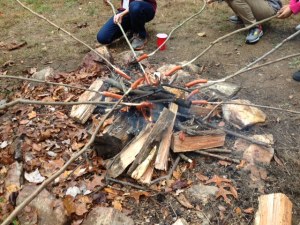 Only one of the students had any Boy Scout type of background.  Lighting a fire for cooking was a challenging experience, and my husband Mr. Pioneer Man even let them use matches.  They finally got it going, although I briefly thought we might have to resort to eating raw hotdogs.   Next year, they are going to start the fire with flint (which will take them even longer).  Next year, I am also going to buy more hotdogs.  I did not take into consideration the number of wieners that would fall off their sticks into the fire.  We had enough to eat, but they had worked up quite an appetite from chopping down all the woods.

Campfires call for s’mores.  It’s not a pioneer thing.  It’s just plain ol’ American.  Originally I was going to skip the s’mores because the international students are usually put off by the super sweet stuff that Americans eat.  But when I asked in class if they liked marshmallow, they immediately asked if we would be doing s’mores.  So we did.  I did not get any amazing photos of  torched marshmallows because I was so busy breaking Hershey bars and graham crackers into squares.  So much for internationals not liking sweets.

For most of the students it was their first American field trip–and to an actual field, at that.  On the ride back to school (after a final act of dousing the fire with the water they had hauled from the stream), half the students fell asleep.  It was probably because of their homework-induced sleep deprivation.  But I’d rather attribute it to a day in the great American outdoors.

Some vocabulary issues to touch on this week (and a peek into why the vocabulary load in chemistry is so daunting):

One thought on “Pioneers in the woods…or is it wood?”