Up to our ears in wax

Beeswax.  We’re up to our ears in beeswax.

(I’m so tempted to recount an earwax story my sister told me about a certain niece’s boyfriend, but I’ll behave myself.  Family members have here enough data to figure out the source and ask her–if they dare.) 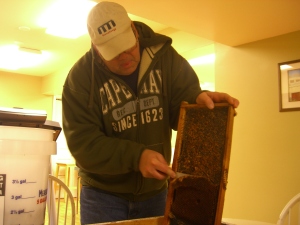 Actually, it’s not the beeswax but old honeycomb that we have in great supply.  Mr. Beekeeper is using the demise of all the bees as an opportunity to clean all the frames. This, ideally, should be done regularly on a rotating basis so that we aren’t dealing with processing 80 frames of comb. (The real reason is to provide healthy conditions for the bees, but this is not about the bees today, this is about me.)   However, we never claimed to be ideal beekeepers and we do have 80 frames of comb in the mancave to deal with.

Four hives full of old honeycomb is a much bigger ordeal than melting the cappings from a honey harvest.  Cappings are beautiful white fresh wax that bees make to seal the finished honey product.  Cappings are the tops of the comb.  Harvesting our honey yields about a kitchen colander full of cappings, enough to make a batch or two of lip balm.  In contrast, old brood comb that has been sitting around is brown and black.  It is full of sticky propolis and pollen and old cocoons and yuck.  Scraped off the frames, it is crumbly like granola and sawdust.  To make a grand understatement, there is a lot more debris in the comb than in the cappings.  The comb from our four hives will eventually fill multiple 5 gallon buckets.

Old comb from the empty hives

Why do I even want to deal with this?  I want the wax.   I want to have wax so I can make some lip balm and some candles.  I want to be able to offer the art teacher at my school some wax so that a student can try a hand at encaustic painting.  I want to be able to say to my brother-in-law, “Sure, you can have some wax to lubricate the bullets for your black powder shooting!” And Mr. Beekeeper plans to roll some of this clean wax onto the empty frames to give the new bees a jump start.

There really is a lot of debris in old comb.  The debris not only accounts for the volume in the bucket; the wax sticks to all that glop, making it difficult to extract all the wax.  Melting Batch #1 of comb resulted in a layer of wax so thin that Mr. Beekeeper broke it  into crumbs when he touched it.   (And then I yelled at him.)  With Batch #2, I  squeezed the cheesecloth-enveloped glop (the “official” beekeeper term–I kid you not–is slumgum) to extract more wax.  That resulted in a wax disc the size I normally get from cappings. By Batch #3, I was running out of cheesecloth so I raided John’s undershirt drawer.  (He’s due for new undershirts anyway.)  I’m now reaching the end of Bucket #1 and pondering how many pairs of dead pantyhose are lying at the bottom of the laundry pile in my closet.

For the uninitiated, I first wrap the comb wax in a filtering fabric like cheesecloth.  Then I heat it in a pot of water until all the wax melts (about 20 minutes).  I squeeze the cheesecloth to extract as much wax as I can.  I remove the cheesecloth and let the liquid cool.  The wax rises to the top and solidifies.  I lift off  the wax and dump the rest of the liquid.  (For more detail and photos, check my archived post “Purifying the beeswax.”)

This is what I got from the better part of a 5 gallon bucket.

The first bucket yielded 2 disks of wax and some crumbs.   It will have to be processed again to make it cleaner.  And the blobs of slumgum can be re-processed to extract even more wax.

A normal person would abandon the melting-bee-glop-in-underwear-on-the-stove project and do something more productive, like bake cookies.  Alas, my first three batches of wax and a Sunday afternoon in cyberspace have merely motivated me to do it more efficiently with the next batch.

You may think I’m nuts to spend my time on this.  Fine.  You mind your  own beeswax and I’ll mind mine.  But don’t complain when I charge money for my lip balm.

2 thoughts on “Up to our ears in wax”