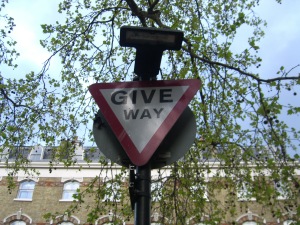 I  think I’m in London.  That’s where the plane landed.  And there are red double-decker buses lumbering down the streets.  The traffic goes in the wrong direction.  Yield signs say “Give way” and exit signs read “Way out.”  I have pounds, not dollars or euros, in my purse.  We take the Tube (or the Underground) to get anywhere.  We went to the British Museum–that’s in London, right? 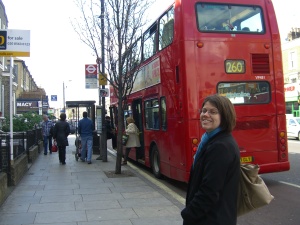 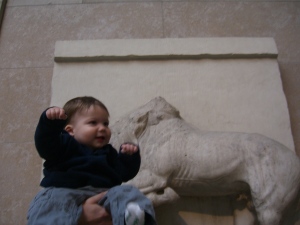 This tourist doesn't speak Greek yet, but his Nonna is working on it.

At the British museum, where we went with Mario’s mother (native-born Greek with undergrad degree in archeology), we saw the Elgin Marbles.  They are not marbles as in, “I’ve lost my marbles” or that childhood game of little round balls that my mother used to play.  The Elgin Marbles are the phenomenal marble friezes and statues that once ornamented the Parthenon in Athens.  The Brits acquired them with permission of the Turks.  Greeks prefer the word “stolen.”  At any rate, there were quite a few Greek speaking tourists at the museum. 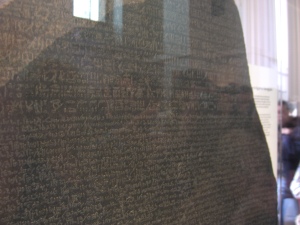 At the Rosetta Stone exhibit there was, appropriately, a variety of nationalities snapping photos.  I was near a crowd of Asians but heard French schoolchildren pass by, clearly on a school trip.  Their teacher spoke in French with a universal message: “Il faut faire attention.  Je ne vais pas retourner” (You need to pay attention.  I’m not coming back.)  French graffiti adorned the ladies room stall.  Alas, it was pathetic in its unoriginality.  However, there was enough French being spoken to have me very close to saying, “Excusez-moi” as I made my way around. 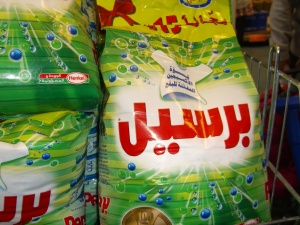 Trivia quiz: What is this?

The abundance of Egyptian artifacts at the British museum comes in second to the abundance of Arab-speaking residents in the Shepherd’s Bush area of London where daughter and son-in-law live.  Many shoppers in the local open air market wear burkas. Kristin is just as likely to visit an Irish butcher as a Polish butcher as a Halal butcher.  We stopped at a small grocery on Wednesday and had no trouble with the produce–an eggplant is an eggplant no matter what your language calls it.  The boxed goods, however, had us using all sorts of context clues to guess the product.  Was that a bag of cat food or dishwasher detergent?  The labeling was all in Arabic.  Kristin and I put our two brain cells together and figured out that the circles represented bubbles, so it was a cleaning product.  But what kind?  Oh…….there is a shirt on the label.  It must be laundry machine soap.  We bought some Coca-Cola because the bottles were in Arabic and it was made with sugar, not corn syrup.  We haven’t drunk it yet.  We mostly just wanted the bottles. 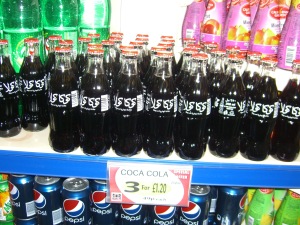 After our visit to the British Museum with all of its non-British artifacts, we tasted local Britain with a Taddy lager on draft at the Fitzroy Tavern, a favorite pub of Charles Dickens and many other artists and writers.  We might have stayed for dinner but the number of heavy drinking tourists has led management to ban children after 6 p.m. when they begin serving dinner. Just as well. Baby John did a full forward head bang onto the table and Kristin had to chug her beer so we could leave.  (No, we were not the heavy drinking tourists!)

Friday’s itinerary has Kristin and me going to the Kensington Hotel for high tea.  Saturday we’re off to the market at Notting Hill.   And Sunday’s tour will include not only Kristin’s and Mario’s offices, but a spin into Harry Potter land.  That’s all really rather quite British. 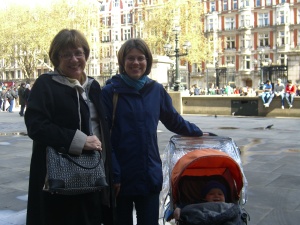 At the British Museum