We are pet-less for the first time since about 1987 when Kristin, age 4 or thereabouts, prayed for a cat.  A cat wandered into our yard; John fed it a hotdog; it adopted us.  When we moved to Maywood in 1993, the cat came with us and promptly died.  I took Kitty to the vet who pronounced liver and kidney failure, and we paid the vet to euthanize the cat, who would have fallen asleep and died for free in a day or so if I had done absolutely nothing.

With three sobbing girls who had just moved and were starting new schools, we needed a new cat.  The vet offered us a “free” kitten.  It had been hit by a truck, stitched up, medicated, and vaccinated, and we could have her for the cost of the vet services.

Several hundred dollars later, we had a dead cat in a shoebox and a calico kitten with vocal problems and ears like a bat.  We named her Peaches because her patches of orange looked like she had been eating some.

Kristin, Julie, and Peaches circa 1994

Peaches’ early years were ideal for a cat.  She had the house to roam, but also all of Maywood.  She prowled amongst the daylillies like a tiger in the jungle.  She caught mice and voles.  She chased chipmunks.  (One escaped Peaches by running up Kristin’s  body and playing possum by hanging upside-down on Kristin’s perfectly chipmunk-colored pony-tail.   Kristin freaked and shreaked.  I said, “Stand still!  I have to find my camera!”   I can’t find that picture, but the image is burned into my memory.)

Then we got a young dog.  Peaches was not pleased with the dog.  When the dog had puppies, we kept one, who pretty much had it in for the cat.  Peaches found herself hiding upstairs.   No wandering the great outdoors.  No exercise.  She stayed upstairs and ate and got enormously fat.  And angry.

When we moved next door into our new log home, the cat had a larger upstairs to be confined in, and we trained the dogs to stay out of the carpeted family room.  While the dogs sat at the edge of the kitchen gazing at the roaring fire, Peaches would sneak down the stairs and through the music room, regally processing into the family room and settling in by the hearth.  The smug look she cast on the dogs proclaimed, “Ha!” louder than any meow that would ever squeak out of her damaged vocal cords.  This emboldened her to take swats at the dogs if they challenged her right to descend the stairs.   Eventually, she even ventured outdoors again, where she continued to perfect her hunting technique and she regained her youthful figure.

After down-sizing to one dog (for the sake of my gardens and delivery persons), the cat would actually tolerate being in the same room with the dog.  The first time it happened, we all froze to witness the stare-down between Peaches and Hershey.  Of course, Peaches won.  She’s a cat.  And as years went by, they developed a weird relationship, not unlike some marriages, where they would sit near each other but never touch.  And if Hershey made a too-friendly move, Peaches would hiss and swat and put Hershey in her place. 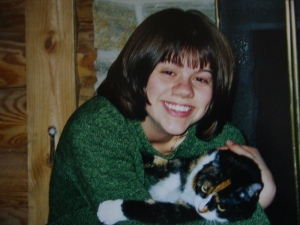 Kristin and Peaches circa 2000

Meanwhile, however, Peaches and I were not getting along so well.  If the pecking order indicates that cats reign over dogs, it also says that I reign over any daggone animal.  So we engaged in an ongoing power struggle.  Peaches would pee on anything on the floor, and she would target the object by whomever she was most angry with.  When Kristin went away to college, the cat never forgave her.  Also, when Kristin went away to college, I began using her bedroom floor to dry my handwashable sweaters, thus setting the scene for Peaches undoing.

We had gotten new sofas one summer and, not wanting the cat to do her nails on them like she did the last sofa, I cast her outside for the summer.  When cold weather set in and Peaches sat at the French door on the porch looking forlornly at the warm family room, I took pity on her and let her in.  She marched right upstairs into Kristin’s room and pee’d on every single one of seven handwashable sweaters that I had drying on towels on the floor.  It was so deliberate.  It was total vengeance.  I kicked her out into the cold.

Blizzards came.  We endured the double whammy Snow-mageddon.  Winds roared.  Hurricanes blew through.  The cat stayed outdoors.  We fixed a warm box for her on the porch, but that was the closest she got to the family room.   She would sit by the glass door with either a pathetic look (at John) or an evil glare (at me).  But she did not come in.  She got older and hardier and she would not die.  Spite was keeping her alive.  About a week before she died, it was snowing.  John watched her saunter out from under the cabin and deliberately stand in the yard until she was covered with snow.  Then and only then, did she come up on the porch and give a glare that announced, “Do you see this snow on my back?”

One day, it was clear that Peaches was failing.  She wasn’t eating or climbing the few stairs to the porch.  John took her food down to her, but it was probably eaten by a raccoon, not the cat.  Then on a beautifully balmy January day, she stretched her nineteen year-old self out in the sun and died.  (She might actually have died during the night, but it was incredibly warm weather and I do not have to feel guilty about her freezing to death because she didn’t. )  John buried her in the yard next to Hershey in the soft dirt underneath the compost pile. 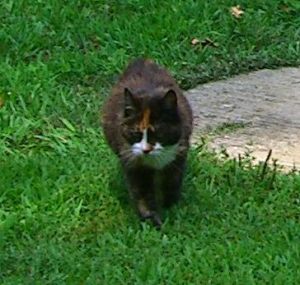 Oh yeah, the hampster died, too.  Fluffball the Third was found dead in her cage.  She and the contents of her cage were unceremoniously dumped onto the compost pile.  Upon hearing of her death, Rich summed up her life this way: “Eight months?  That’s not bad for a hamster.”