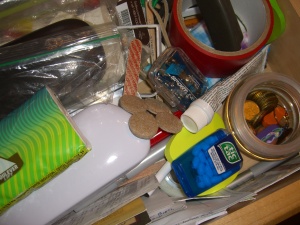 Once upon a time I had a junk drawer.  That was back when I had very few drawers.  My current enormous entertain-a-crowd kitchen has so many drawers that when we moved into the house  I didn’t even have things to store in them all…at first.  With ample space I merrily organized the drawers so logically that when friends came over and asked where something was, I could say, “Where would you want it to be?” and that’s where they would find it.

I assigned one drawer for sharp things (aka, knives and scissors, although certain family members can’t seem to figure out that ice cream scoops are not in this category).  Another drawer was for cooking tools like spoons and spatulas.  Somehow cooking spoons ended up in the silverware drawer.  I don’t know why.  Maybe someone thought that the silverware drawer was for things that looked shiny.  Hmmm…that could explain why the olive wood salad tongs are in the cooking spoon drawer.  Someone must think that is the “plastic and wood” drawer.  I’m surprised that the dish towel drawer and the oven mitt drawer haven’t been confused–they both contain soft things.

(Teacher note here…this is probably why they redid the whole SAT format.  No one knows how to do analogies anymore.)

Anyway, there are so many drawers in my kitchen that I was very generous with them.  In addition to the desk drawer (for desk related items one would need to actually work at the desk, which has never, ever happened in the history of living here), I actually designated one drawer in the island solely as my junk drawer.  This makes sense since I spend most of my kitchen time at the island.  I also gave John his very own junk drawer.  In addition, I gave him two drawers of his own in the kitchen desk to organize his pocket-crap and other work related stuff.  “Organize” is maybe not the most accurate term.  “Deposit” might be a nice way to phrase it.  “Dump” probably hits it best.

Are you following me?  We technically have five drawers dedicated to random whatever.  That makes them junk drawers.  Having more than one junk drawer might be like having more than one rabbit.  Or hamster.  Or any other rodent that you don’t want multiplying exponentially.  After thirteen years in this house, every drawer is looking like a junk drawer.  There are way too many places to go hunting for a spare AA battery or a nail file or a pad of paper for making a grocery list.  We won’t even discuss pencils with an actual point on them.  Which reminds me…where the heck is the pencil sharpener?

It may be time to dump out the contents (one drawer at a time–I know my limits!) and start fresh.  This should be simple, yet I recall a crisis my sister encountered in her ten-year-old daughter’s cluttered room when she tried to get rid of a penny, a piece of string, and a hair tie.  Her daughter protested, “Mom! NO!  They’re special!”  I don’t think I’ll get too sentimental over old key chains and dried up gel pens, but who knows what’s lurking in a junk drawer?

This would make a good contest.  Who has the most amazing junk drawer?  I dare you to submit your photos.  I’ll get you started with a picture of John’s: 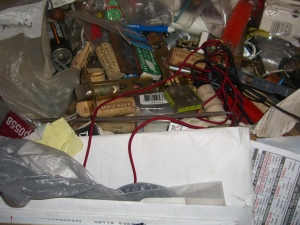