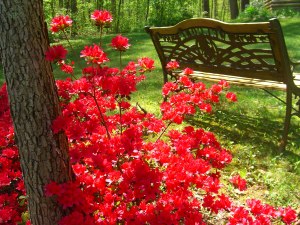 Mondays at Maywood are my musings from my corner of the Hereford Zone.  So far the posts on my MaywoodLiving blog have been mainly read by friends, family, and whoever reads my husband’s Facebook posts, but The Zone Magazine has invited me to share my posts via their website on Mondays.  So welcome Hereford Zone readers!

Maywood is the property on which we live, bought by John’s grandfather in 1940.  The name is derived from his grandfather’s name, Maynard, and his father’s name, Markwood, but captures the beauty of this place in the spring when dogwoods and tulip poplars bloom and fragrance the air with an aroma I’ve found nowhere else.  It is the family homestead.  John spent his boyhood summers here (often sent off with his sister by his grandmother to locate the non-existent Indian caves!).  He proposed to me here.  Two of our three daughters had summer weddings here.  And now our five year old grandson zips along on a little John Deere tractor just like PopPop.

This is my favorite time of year at Maywood.  We’ve gone from being a lonely winter outpost overlooking 83 to our own little Brigadoon, surrounded by trees and tucked away from the world.   The world still roars by, especially at night if the windows are open, but during waking hours birds often outchirp the traffic.  Today the blooming wild dogwoods surround the house, the azaleas blaze a border around the porch, lilacs perfume the kitchen, and lilies of the valley run rampant out front.  Four hives of honeybees zip and zoom through it all, gathering the ample pollen, and hopefully making lots of honey.  Spinach and lettuces emerge in the potager, getting ready to join chives, parsley, and wild violet in a salad.

Daylilies are leafing everywhere, already mocking me for my delay in dividing them.  Garlic chives, lemon balm, and fennel have reseeded with irresponsibly reckless abandon all over the herb garden.  Chipmunks have burrowed the entire Paris metro system under the yard, destroying any hostas that get in their way.  Carpenter bees dive bomb me when I venture outside and armies of ants are planning their assault on the kitchen.  But I’m hopeful.  In spring I feel like I can conquer the Wild America in my backyard.  But if I can’t conquer it, I can at least write about the battles.  I might even win some.

One thought on “Mondays at Maywood”