A snow day view from the Hereford Zone

Baltimore County two hour delay.   Schools in the Hereford Zone are closed.  Sorry, Julie, that you are teaching at the other end of the county, but as you know, the roads are tricky out here–hilly and windy with guardrails lacking in critical drop off areas, like the sharp bend on Miller Lane!  Ok, so it’s not like we really got blasted out here.   We have three or four inches.  If I could get out the driveway, I could have zoomed the highways to school.  It’s not like I’m snowbound.   So I’m really glad to have the back-up of Carroll County.  I may live in the Hereford Zone but I don’t work here.  My commute takes me over to Howard County, which only had a two hour delay today.  Many of our students, however, live in Carroll County, so we go with the more conservative call.  Carroll County conditions tend to mirror the Hereford Zone, so it works out well for me. 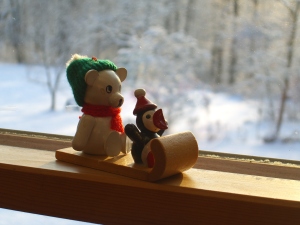 Harper doesn’t know it yet, but his buddies up the road are home from school today.  We haven’t told him because we aren’t yet in the mood to deal with the activity level of three kids in the snow–whether here or over at their house.  He’s still content and we have other things we can get done while he’s busy.

John has been outside plowing the road for the past couple of hours.   I made a grandiose effort to make a fresh pot of coffee for him.  When he comes in, maybe he’ll get a fire going in the woodstove in the basement.  (If the man cave warms up, I’ll warm up to the idea of three snowy kids in and out of the house.) 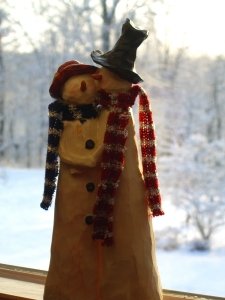 How thankful I am that John takes care of us

If I were a true pioneer wife I would be building the fire and probably taking my turn on the tractor.  But I am not. I’m a beach kid who was whisked away to the woods.  So I’ll sit near a window  and soak up some solar energy that is bouncing off the snow.  And when John comes in, we’ll sit by the fire and I’ll let him put his head in my lap.  And he’ll call it even.