A-Hunting They Will Come 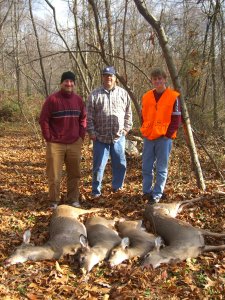 Mike, John, and Gage with their 4 deer

Some people think it’s lonely living in the woods.  Not so.  Especially during hunting season.  There is often someone out there in the woods and frequently they stop in for coffee (in the a.m.) or beer (after an evening hunt).  Around the kitchen table, they shoot the breeze with John and debrief from their hours in the tree stand until a text message from a wife gets them packing.

I love the messages.

“You’re in John’s kitchen having a beer, aren’t you?”

Ooooo.  She nailed him.

Yesterday morning, John got a text from Mike in the woods.  There were deer everywhere.  He and son Gage had just gotten two.   John needed to get out there.  So John took his shotgun, a cup of coffee, and a cigar out to his tree stand.  His unconventional strategy of smelling like normal did it’s usual trick of not alerting the deer to anything abnormal.  He shot 2 does.

Four deer in the driveway made for a full afternoon of  guy-bonding butchering while I scooted off to Tuba Christmas downtown.  Today we will eat venison tenderloin with cranberry-dill sauce.

The deer with the dear who will cook them

This recipe is from Barrie Kavasch’s Enduring Harvests cookbook (1995, Globe Pequot Press).  I bought it because it had a venison recipe in it but found it had a lot of other great recipes, too.  And the best part was that, because they were Native American recipes, the ingredients were easy to find and inexpensive! 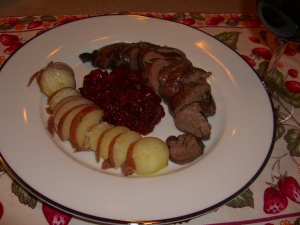 Combine all but dill weed in a medium saucepan over medium-low heat.  Cook, stirring to blend thoroughly, until cranberries pop, about 10-15 minutes.

Add the dill weed. Remove from heat.  Serve hot or cold.  Flavors get even better after a day in the fridge.

*I substituted our Maywood honey and a touch of molasses for the maple syrup.

One thought on “A-Hunting They Will Come”